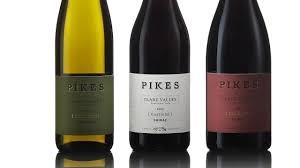 Years ago, brothers Neil and Andrew Pike put in place a family succession plan. In April 2019, when Neil retired after 35 years as senior winemaker, Steve Baraglia, previously second in command, moved up into his place. Andrew and wife Cathryn acquired Neil’s share of the business, sister Heather retaining her share, and sixth generation sons Jaime (sales and marketing director) and Alister (Pikes’ co-manager of the brewery opened in 2014) joined the company as shareholders. In November 2018 a new tasting room and the adjoining Slate Restaurant were opened, the cost defrayed by a $320,000 state government regional tourism grant. As 2020 came around, the restaurant had already won an Australian Good Food Guide Chef Hat, the cellar door was a major success, and all was good.

Move forward to March and with vintage in full swing, Covid-19 closed the venue overnight (although not the winery). The family decided it would keep everyone employed, deploying those willing into the vineyard and to maintenance duties that otherwise would have been contracted out. The venue was allowed to reopen with multiple restrictions on June 5. The tasting room’s capacity was halved for seated-only consumption, cleaning and sterilising for each new intake; the restaurant’s capacity was reduced to 60 per cent with set seating times. Unexpected developments have been the highest visitation levels fuelled by intrastate tourism, and the positive reaction to seated tastings reflected in increased spending per customer. Jaime Pike urges visitors to check ahead if planning a trip due to the uncertainty of restrictions across the Clare Valley and elsewhere.

2017 Pikes Eastside Clare Valley Shiraz
From the Polish Hill River, with its exceptional length and focused intensity. Has immediate appeal that grows and grows each time it is retasted, cherry and blackberry with a fine skein of tannins providing structure. A great example of the cool vintage. 14% alc, screwcap 95 points, drink to 2037, $27

2017 Pikes The E.W.P. Clare Valley Shiraz
This takes its ’17 Eastside sibling and increases every metric without going OTT or out of balance. This is a special wine, with tannins that have complexity within a silky exterior, the fruit flavours poised between dark cherry and opulent plum.time it is retasted, cherry and blackberry with a fine skein of tannins providing structure. A great example of the cool vintage. 14% alc, screwcap 97 points, drink to 2037, $70